The tech enabled gig economy is causing the corporate world to probe at what British Economist Ronald Coase famously called the “Boundary of the Firm.” And it feels like a sore tooth.

Corporations are hierarchies, and a hierarchy is all about belonging to a structure (tribe) that everyone- ideally- understands where they stand in the power structure. Great! Except when more than FTEs are needed to get the firm’s work done profitably. Then “it” (interacting/communicating/negotiating/managing nomads) goes to the proverbial fan.

In theory, it should be easy to externalize resources. After all, it makes great sense, from Coase’s standpoint: the boundary of the firm is defined by the “transaction costs” associated with obtaining the right resources to perform the work efficiently and profitably. Coase’s work in 1937 contributed to his eventual Nobel Prize. Quite the smart dude.*

The tech enabled gig economy lowers those barriers and therefore transaction costs associated with finding and engaging talent.  Figure 1: Between T1 and T2 is the potential for the flexibility, agility and resilience that, post-Covid, are now universally recognized as pillars of competition. 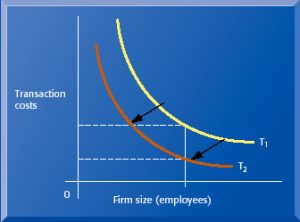 That’s very clear and logical! But there’s a clash of scientific disciplines, because embracing the gig economy has been anything but easy for the corporate world. Despite the proliferation of technologies, systems, ted talks and think tanks devoted to this issue, the problem hasn’t been solved, not even close.

Consider a recent observation by LifeSciHub, a tech-enabled gig economy marketplace for life sciences independent experts. A drug sponsor hiring entity, Chris, and an independent expert, Pat, had worked together for 700+ hours over 16 months. April 2021 was when the contract would have been extended. It wasn’t.

At about the 6 month mark we had started to hear grumblings on both sides. Chris felt Pat wasn’t “leaning into the role enough.” Pat seemed uncomfortable and hesitant, which made Chris question Pat’s skills and experience. Pat, on the other hand, felt immobilized by frequent exclusions from important emails and meetings, which, Pat felt, impaired Pat’s ability to perform with adequate information and authority.

In fairness, Chris may have already decided to go in a different direction, but it was Pat who initiated the breakup. As is the case with all of the independent experts on the LifeSciHub platform, she had other clients, and one of them, Dylan, had an opportunity to significantly increase her hours. “Dylan and the team makes me feel welcome” Pat said. “No one makes a big deal or even knows who is an independent contractor, who works for a vendor, and who is an employee. It’s not important! We all just focus on the work. I feel totally empowered to make the decisions I need to make in order to drive the objectives forward.”

Dylan’s organization has successfully removed barriers to collaboration. Chris’ organization, on the other hand, places great importance on one’s standing in the organization’s hierarchy. Those who don’t belong aren’t to be trusted, at least not fully. Certainly they don’t need to be included in most things, because the non-FTE’s aren’t truly part of the tribe. These FTEs are most likely oblivious to how this is perceived by “outsiders”. If pressed, they may even, in true innocence, deny that it’s happening, or that it matters.  After all, why does it matter how the outsider feels?  Only FTEs truly matter.

Such is the fear of outsiders that organizations may be deliberate about excluding non-FTEs.  There could be a kernel of truth informing exclusionary policies, such as fears of worker misclassification risk.  “We need to constantly reinforce to non-FTEs that they are not, in fact, FTEs, so that they don’t sue us for FTE benefits one day.  Or at least, if they do sue us, we can at least prove that we were reminding them over and over again that they were not employees,” so the thinking goes.  And yet little or no consideration is made for the damage to productivity, especially to long term projects, caused by deliberately creating such rifts in teams.  Team health and productivity is further exacerbated by the prevalence of post-Covid remote work.

Confidentiality is another justification to prioritize division between members of the tribe and nomads, as if being a member of the tribe somehow protects the tribe from breaches of confidentiality.  As the corporate world has seen over and over again, no agreement or technology can protect an organization from a whistleblower if that worker is determined, many of whom, historically, have been FTEs of the company’s whose confidential information they willfully disclosed to the public.

Organizations that believe there’s a significant difference between FTEs and everyone else have fallen victim to evolutionary biology. It is nothing short of awesome how compelled we all are, as human animals, for our brains to organize all data inputs on whether this piece of information makes us safe or unsafe. The processing happens on a micro-granular level, information categorization-wise, and largely outside of conscious awareness. The brain is especially keen to assess safety based on one’s standing on the social hierarchy. Since corporations are hierarchies, and non-FTEs are outside of the hierarchy, this can be a big problem for firms, as they attempt to transition use of non FTEs from a tool of last resort to one of deliberate, strategic value.

People these days are so dazzled by the internet and the moon landing that we like to forget how powerful our animal instincts really are, but consider how deep the hierarchy goes:

Sooo, yeah. Maybe reaching outside a hierarchy is a lot harder than any of us give credit? Maybe technology/approval system/third party ecosystem/AB5 won’t solve this problem?

In the Revolutionary Genius of Plants, Stefano Mancuso takes it a step further by comparing the animal kingdom’s hierarchical approach to the plant world’s networked approach. Both kingdoms (ultimately) use the energy of the sun to create value. Animals have bet big on hierarchies and centralized control (brains). Plants have bet on networks. As the core competitive strategy, plants have figured out how to distribute power in way that allows agility, and, if not decision making in the human sense, adaptability across the species/system.

I would argue that until the unconscious (individual, group, cultural) power of the hierarchy is identified, understood, and, perhaps, transformed towards networked, distributed power structures and decision making, a firm that tries to compete via resource agility will be hobbled by a giant pair of concrete shoes it doesn’t even know it’s wearing. For more on fish who can’t see the water they’re swimming in: Flexibility: Org Chart Anathema

We will review the reports from both the Expert and hiring entity to give the best decision. It will take 3-5 business days for reviewing after receiving two reports.